In the work of the Los Angeles– and Paris-based decorator, elegance and ease go hand in hand.

A self-described “château addict” — the Loire estate is the Southern California native’s fourth foray into rehabilitating historic French castles — Corrigan nonetheless takes a practical and accessible approach to interior design, one that emphasizes comfort and livability without sacrificing style. He came to the field later in life, following a successful career in advertising and after gaining hands-on experience decorating his own homes. Living in Paris in the late 1980s and early 1990s while overseeing the international offices of a major American ad agency, Corrigan was exposed to Europe’s rich, layered culture. He would visit two or three countries a day for work, then spend weekends roaming museums, auction houses and flea markets. “Growing up in California, you’d never see giltwood furniture,” he recall. “Living in Europe totally opened up my eyes in a different way to art and design.”

After British House & Garden featured his decoration of his Paris apartment in 1991, Corrigan started getting commissions to decorate homes — a second job of sorts that he worked on at night. In 1994, he returned to New York for an even more exalted position in advertising, which he soon found consisted of “just putting out fires.” Unhappy at being “so far removed from anything creative,” Corrigan realized that Europe had changed him. It was time for something radically different.

In 1998, Corrigan took the leap and became a full-time interior designer, launching a firm in his hometown of L.A. Drawing on his marketing background, he positioned his practice astutely, creating the slogan “a world of comfortable elegance.” Despite his lack of formal training in design, Corrigan now conceives furniture and fabric collections for Schumacher; its sister flooring brand, Patterson Flynn Martin; and Perennials, which makes fabrics and rugs. He also deals in antiques from both a 1stdibs storefront and his studio, in L.A.’s La Brea neighborhood

Corrigan’s major residential commissions include a sparkling beachfront palace for a Qatari royal family with the sunny, laid-back yet luxurious look of old Palm Beach. The 43,000-square-foot castle in the sand is also supremely functional and family-friendly. Outdoor fabrics and rugs cover the chairs and flooring in the dining room and drape the walls and seat cushions in the two pavilions.

The Qatari palace is one of 11 homes documented in Corrigan’s latest book, The New Elegance: Stylish, Comfortable Rooms for Today (Rizzoli), written with Michael Boodro, the former editor in chief of Elle Decor. The featured projects embody his core design principle: “If the most beautiful room isn’t comfortable, it’s not a success.”

In a family’s newly constructed colonial-style house in the Brentwood section of Los Angeles, for example, Corrigan outfitted the living room with floor-to-ceiling shelves packed with books and cozy, sink-into sofas that invite you to sit down and start reading. To make a covered porch feel like a real room, he placed a landscape painting above an outdoor fireplace and hung Balinese figurines on either side of it. 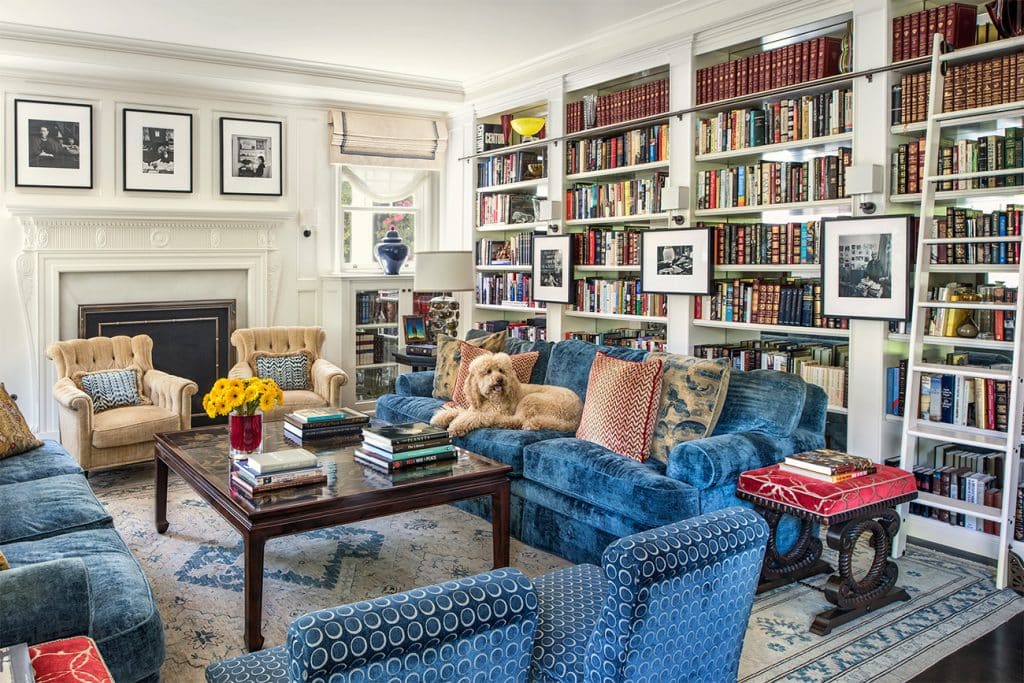 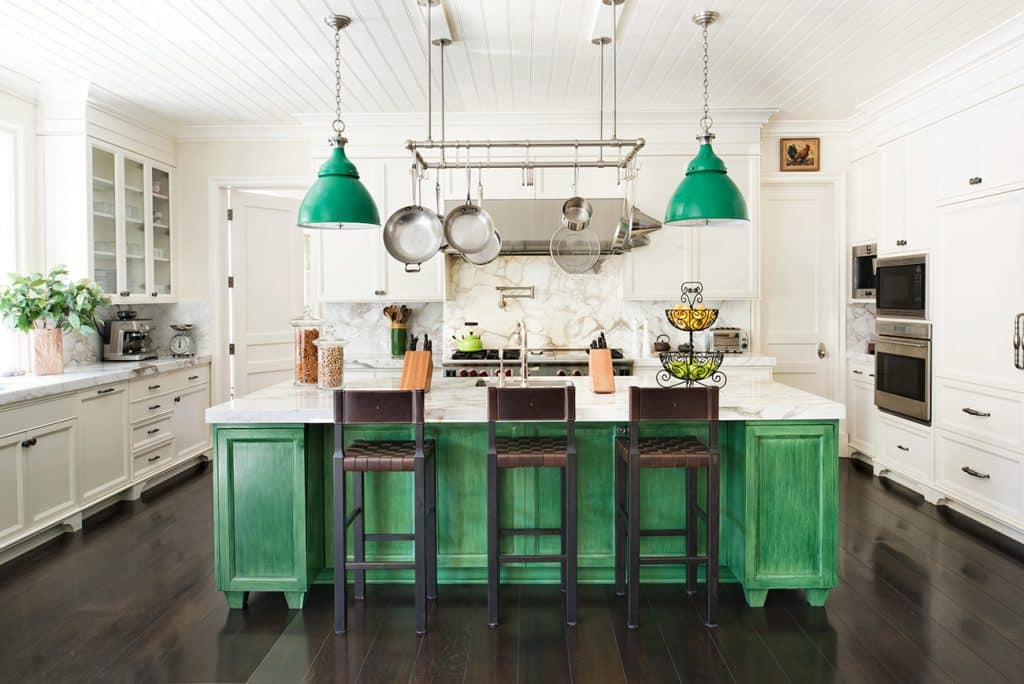 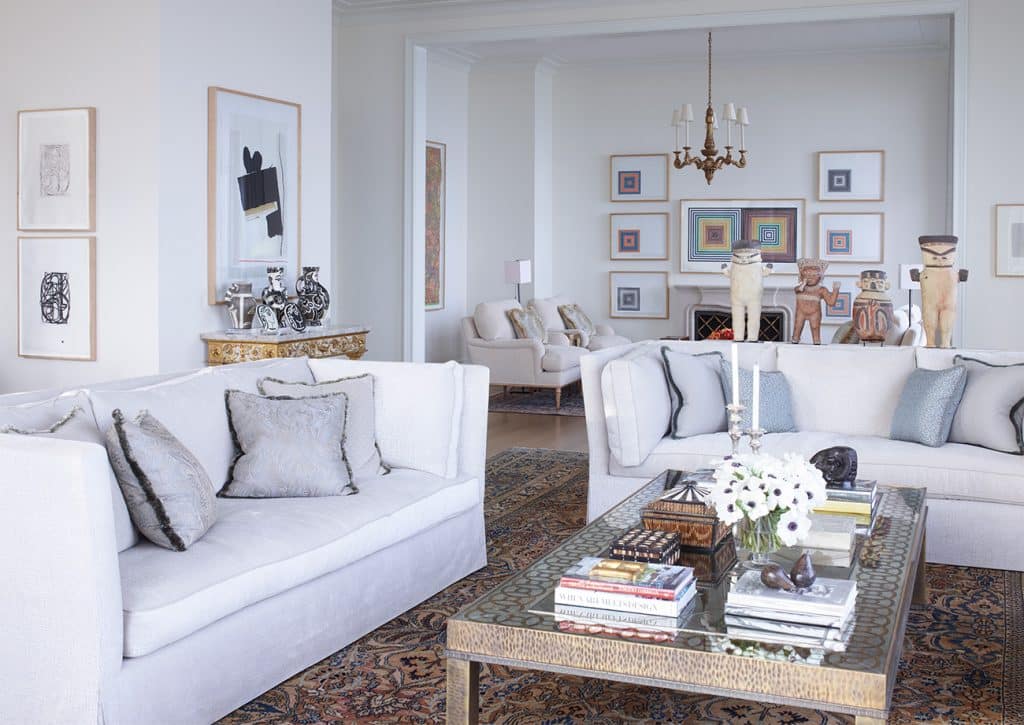 “The formal living room that people use only on Thanksgiving or other holidays — that’s the antithesis of how I want people to live in their homes,” Corrigan explains. “You should be able to put up your feet on the sofa and feel like your children or guests can spill grape juice or red wine without freaking out.”

In an art collector’s penthouse apartment in a new glass-and-steel Chicago high-rise, Corrigan applied his same rule about beauty, comfort and livability — albeit in a much more austere way. The building’s construction was barely completed when Corrigan’s client, for whom he had designed three previous homes, told him, “Now, let’s gut the thing,” he recalls with a laugh. As he describes the renovation in his new book, “We wanted to evoke the comforts of a traditional home but still have the apartment fit within the modern style of the building.”

For the entrance, Corrigan fabricated two pairs of intricately carved doors based on ones by Emile-Jacques Ruhlmann he had seen on Paris’s Champs Élysées. “Each door weighs like three hundred pounds and is four-inch-thick solid wood,” he says. “I wanted to give a feeling of substance and architectural integrity the minute you walk in, as the rest of the building is glass-box boring.” Inviting straw chairs surrounding an oak table and a collection of antique French pottery bring the sleek white kitchen down to earth. A pale, silvery blue palette serves to both articulate striking artworks by Jasper Johns, Robert Motherwell and Frank Stella and quietly unite the interiors with the Chicago skyline and Lake Michigan beyond.

Like these projects, many that Corrigan works on involve new construction. But the designer actually prefers renovating old homes. “I like the challenge of working with old architecture and figuring out how to make a space work for today,” he explains. Case in point: his current pied-à-terre in Paris, where he opened a satellite office in 2001. The apartment, situated in a 19th-century Haussmann-style building on a charming two-block Right Bank street, presented plenty of challenges. The living room had eight doors and was designed, says Corrigan, to hold “dainty little chairs — it’s certainly not how people live today.” His solution was to replace some doors with mirrors and display consoles in front of others, then paint the walls in soothing off-whites, accented with thin red lines inset within the original ornate plaster moldings.

The master bedroom had its own defects, including an off-center fireplace, walls of different heights and more “doors everywhere.” Corrigan draped it, like a tent, in a Schumacher fabric of his own design that hides the irregularities yet allows him to access the closets when he needs them. It’s a cozy cocoon, as comfortable as it is elegant — in other words, a beautiful success. “To me, the most important aspect of comfort is how you feel at home,” Corrigan says. “Your home should be a place that allows you to be your best self.” “"If the most beautiful room isn't comfortable, it's not a success."”